EMBRYOLOGY IN QUR’ANThe Qur’an which was revealed 1400 years back ,  proofs that it was the revelation from Allah by testing and relating it to different natural phenomenon and miracles. Embryology is one among the miracles of Qur’an. Ho w can a person named Muhammed (PBUH) who live in 7th century have the ability to write such a scientific phenomenon? A person who didn’t have the knowledge to read and write?Qur’an once again proofs that these description were revealed to Muhammed (PBUH) from Allah through the description of the embryonic development in human body which was found out in the recent times.
In the 23rd chapter of Qur’an, namely Surah Al-Mu’minun (The Believers), Allah describes how a human being is formed from 12th to 14th verses.

(Quran, 23:12-14)
These 2 verses, describes the vast phenomenon of embryology. When we look into the detailed meaning of each lines, we get a clear idea of embryonic development process. This verses are clearly describing the process of the human development in the correct chronological order. 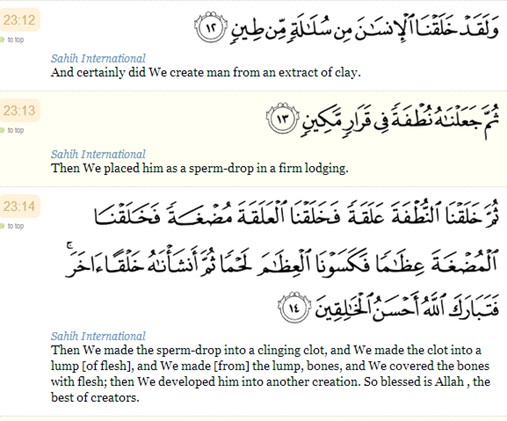 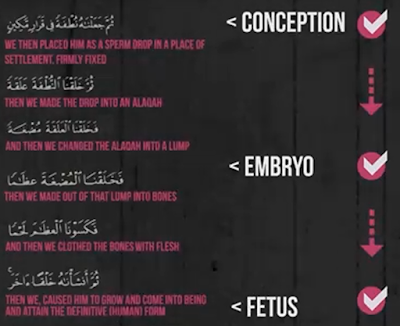 In the technology based on the 21st century, we cannot assure the clear describtion of the first stage. But we can clearly describe the 2nd stage i.e. Embryo.
In relation to the embryonic development, the specific word used in the verses is ALAQAH. (i)                  Literally, the Arabic word alaqah has three meanings: (1) leech, (2) suspended thing, and (3) blood clot.
When we compare a leech (or bloodsucker) with an embryo at the stage of Alaqah (24-25 days), 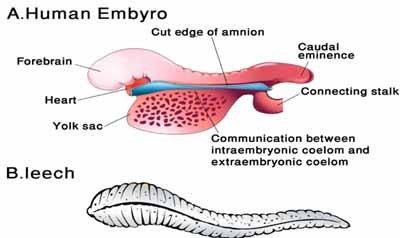 we will be able to see that both of them develops a similar look. the embryo at this stage obtains nourishment from the blood of the mother, similar to the leech, which feeds on the bood of others.   (ii)The second is the ‘Suspended’. When we regard suspension of an developing human, we get through the hanging of the umbilical cord. But now, we know the umbilical cord is formed with the connecting stalk. And the connecting stalk is formed just after the embryo is formed. The connecting stalk has been described by different scientist as a suspending object of the developing embryo in the extra embryonic column. Thus, the developing embryo also satisfy this meaning.
(iii)The third meaning is ‘Blood clot’. 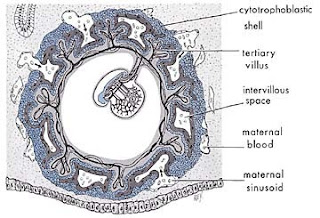 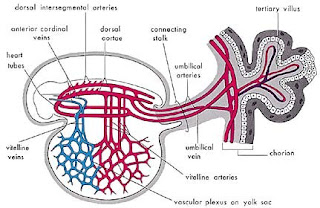 At this stage, we find that the developing embryo and its sacs appear similar to a blood clot. This is mainly due to the larger amounts of blood present in the embryo at this time. And also, at this stage, the blood in the embryo does not circulate. In third week of the embryo development, a tube from heart joins with the blood vessels to form a primary cardiovascular system. And by the end of the third week, the blood start circulating and the heart starts to beat on day 21..Thus, the three meanings of Alaqah have satisfied the embryonic development. 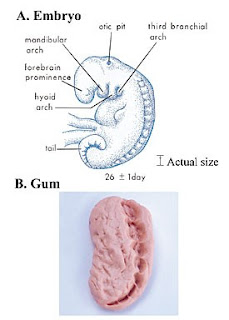 These verses describe the clear embryonic development process which had wondered many scientists all over the world. How could Muhammed (PBUH) could have discovered all these things 1400 years ago while scientists have only recently discovered the embryonic development process in the recent times using advanced equipment and powerful microscopes? Hamm and Leeuwenhoek were the first scientists to observe human sperm cells (spermatozoa) using an improved microscope in 1677 (more than 1000 years after Muhammad

).  They mistakenly thought that the sperm cell contained a miniature preformed human being that grew when it was deposited in the female genital tract.


The descriptions of the human embryology in Qur’an cannot be based on the scientific knowledge in the7th century.The only reasonable conclusion is that these descriptions were revealed to Muhammed (PBUH) from GOD.
All these studies states that the one behind the miracle is non-other than Allah,the only God.